There are 3 kinds of docker builds in NocoDB

Below is an overview of how to make these builds and what happens behind the scenes.

How to make a release build ?

Why? Sometimes we may mess up in NPM deployment. As NPM doesn't allow us to redeploy to the same tag again, in this case we cannot just use the previous tag + 1. Therefore, we need to use previous tag + 2 instead and we manually configure it.

How does release action work ?

To check if github.ref is master. Otherwise, other branches will be not accepted.

To enrich target tag or previous tag if necessary.

Automate a PR from develop to master branch so that we know the actual differences between the previous tag and the current tag. We choose master branch for a deployment base.

Build frontend and backend and release them to NPM. The changes during built such as version bumping will be committed and pushed to a temporary branch and an automated PR will be created and merged to master branch.

Generate a draft release note. Some actions need to be done after this step.

Build docker image and publish it to Docker Hub. It may take around 15 - 30 mins.

Open issues marked with label Status: Fixed and Status: Resolved will be closed by bot automatically with comment mentioning the fix is included in which version.

Once the deployment is finished, there would be some new changes being pushed to master branch. This job is to sync the changes back to develop so that both branch won't have any difference.

What are daily builds ?

What are timely builds ?

NocoDB creates docker and binaries for each PR!

When a non-draft Pull Request is created, reopened or synchronized, a timely build for Docker would be triggered for the changes only included in the following paths.

The docker images will be built and pushed to Docker Hub (See nocodb/nocodb-timely for the full list). Once the image is ready, Github bot will add a comment with the command in the pull request. The tag would be <NOCODB_CURRENT_VERSION>-pr-<PR_NUMBER>-<YYYYMMDD>-<HHMM>.

Similarly, we provide a timely build for executables for non-docker users. The source code will be built, packaged as binary files, and pushed to Github (See nocodb/nocodb-timely for the full list).

Currently, we only support the following targets:

Once the executables are ready, Github bot will add a comment with the commands in the pull request. 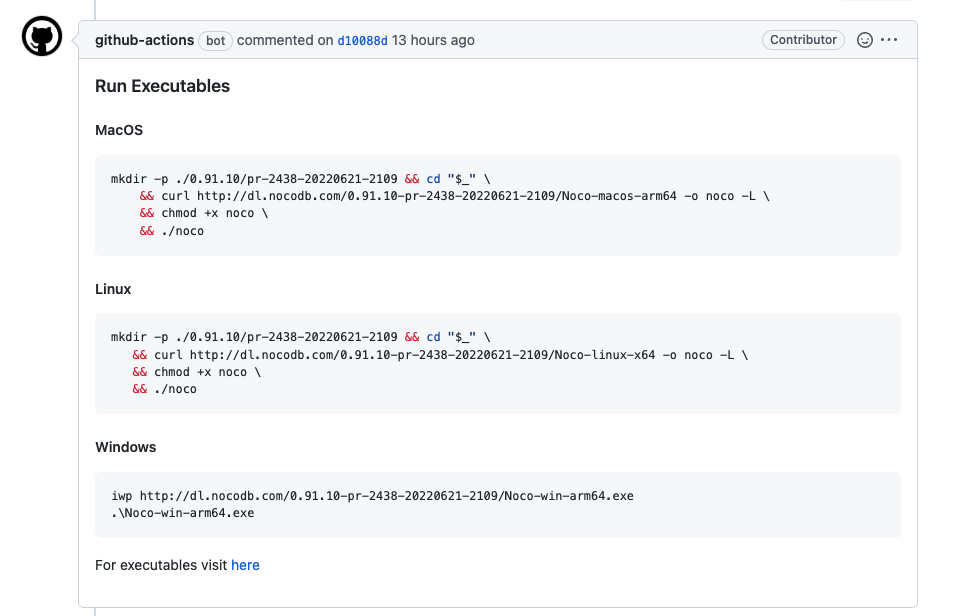 NocoDB creates Docker and Binaries for each PR.